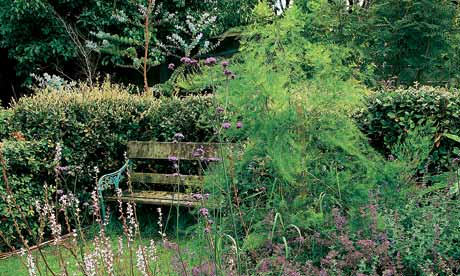 Joy Larkcom’s garden: ‘No one else manages to marry a relaxed, joyful approach to gardening with science and trialling.’ Photograph: Jane Sebire

Two women have moulded and influenced the way I garden. The first is my mother, who gave me the genes to garden as I do, and the second is Joy Larkcom. No one else manages to marry a relaxed, joyful approach to gardening with science and trialling. You can truly trust what she says.

Her book Grow your Own Vegetables is a masterpiece of good sense; I have read it more than once. And her Creative Vegetable Gardening is, as books go, my happy place, one I head back to whenever I feel uninspired by my own garden.

So imagine how excited I was when I got an invitation to her retirement vegetable garden that sits on a windswept corner of West Cork. She and Don, her husband, converted it from a paddock in just under 10 years.

As a garden, it is everything I hoped for. Relaxed, a little messy perhaps to some (but not to the wildlife), joyous with colour and filled to the brim with food. I squished many cabbage white caterpillars in return for some lemon verbena tea. If you want to read more about her garden, buy Just Vegetating. It is much more than simply a memoir – it also takes in her travels in the pursuit of the best vegetables from Europe to China.

In 1976, Joy, Don and their two children headed off in a campervan round Europe to explore how people grew vegetables and to bring rare varieties back to the UK. Thanks to this trip we grow mixed salads, use the cut-and-come-again approach to increase production, and know about rocket and endives. Her writing is a window into a world that barely exists any more, such as the sandy market gardens once found north of Porto that have all but disappeared under development.

As I read, I was overwhelmed with sadness that I would never see such growing, but grateful she captured small-scale farming and market gardening, both in Europe and further afield. To care about such things when gardening, particularly in the 80s and 90s, was moving into a more commercial era with an emphasis on ornamentals, not vegetables, is testament to how ahead of her game Joy has been.

So, I urge you to read this book. It has many answers to small-scale growing of the future, particularly if we run out of oil. I’ve learned so much that every other page seems to have a Post-it note stuck to it: but it’s also a great tale of one woman and her lust to see the world via the humble vegetable.